In the last post I started to describe how patterns in angles can help us find the size of missing angles without doing any measuring. In this post we look at two more angle types. First I will show what we mean by Corresponding and Alternate angles.

Then I will show how we can put all this together to answer a question. 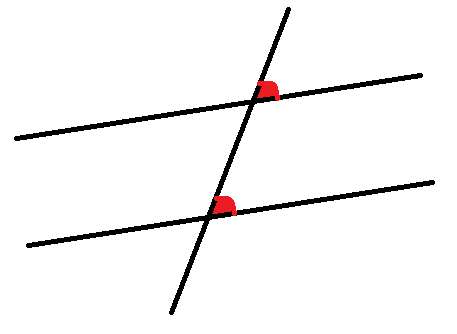 For both of these situation, we need one line crossing two others which are parallel.  If we don’t know the two lines crossed are parallel, we can’t use these rules, got it?

These is what are called ‘Corresponding angles’

This is like the rule in the last post where we know two angles must be the same if they are ‘opposite’. Angles are also the same if the are ‘corresponding’ 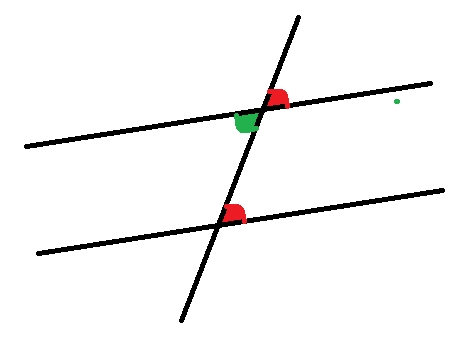 Now look at this diagram.

The two red angles are ‘corresponding’ and the green angle is ‘opposite’ one of the red angles.

So all three angles will be the same.

We say the bottom Red angle and the green angle are ‘Alternate’.  ‘Alternate’ is like a combination of the ‘Corresponding’ rule and the ‘Opposite’ rule.

Some people think of this as the Z rule – because the angles in a Z are the same.

I’ve been looking for an exam question that uses all of these but they are hard to find, and I only want one for this post, which would be too long otherwise…  so…  let’s have a look at this 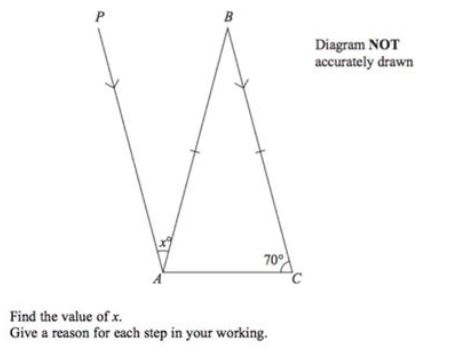 A few points about the wording and notation here
1. I across two lines shows those lines are of equal length : AB = AC
2. > on two lines shows they are parallel. AP is parallel to CB
3. ‘Diagram Not Drawn to scale’ means take the information given as true. Don’t check them with your ruler or protractor.

Do you know about Angle types?

There are a lot of questions you will see that ask you to find the size of an angle, or to show that two angles are the same. To answer these questions you need to know your angle types

Answering these questions, you also have to give reasons, and in giving reasons you need the language for describing different patterns with angles, and different ways of how you can find the size of angles from other angles.

So over this weekend I’m going to post some of these rules, and the names you need to give while describing those rules…..

And I’ll be honest, I have to look some of them up!  Not the rules themselves – I know all of them – but some of the names for them.

After these posts, I’ll give a couple of exam questions and show how to use the names of the rules in your explanations.

Let’s have a look at our first two angle types

Angles that pay each other compliments!  That’s nice.  Well, not quite

The first thing is to remember that there are 90˚ in a right angle and 180˚ in a straight line. How can we use that information to find missing angles?

In all these three examples, we are looking to find the number of degrees in angle x.

So x = 40˚ due to ‘angles along a straight line’. Again, that is what you should write.

In this case, angles x and the one marked 47 are the same size. This is the law of opposite angles. You might be able to see that this is the angles on a straight line, applied twice, but remember the term ‘opposite angles’ and there no need to work out the other angles.  We write

In my next post I will add alternate angles and corresponding angles to the mix. Then we will be ready to tackle a lot of angle questions.

You can find more information about types of angles here

Angling for some fun continues here

For today’s post I am going to look at the  exam question on factors here.

You can see from the question that we are in the area of common factors and multiples, but the question does come with a bit of a disguise!

By making the top as high as possible, and the bottom as low as possible.

So a is the HIGHEST common factor of 72 and 96
and b is the LOWEST common Multiple of 6 and 9.

Its a question about our old friends LCM and HCM – we have see through the disguise!

Let’s find the answer now though. We start by giving our four naumbers in Prime Factor form.

I’ve been posting a lot recently on answers to GCSE questions – mainly because that is what I have been doing with students –  and I do have ten more days of that. 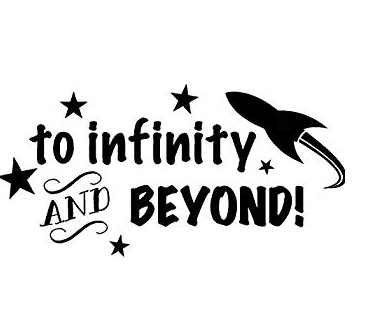 For today something different a look at something quite unusual…  As the title suggests – INFINITY.

Today’s post is based on some of the work of German mathematician Georg Cantor, a man not often understand by his contemporaries – In fact one said he was ‘aha ed of his time by one hundred years. 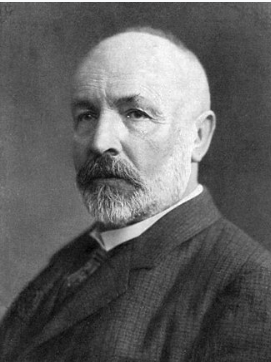 What Cantor was trying to do was explore what infinity means, and his revolutionary idea was that there is more than one infinity!  In fact…  there are an infinite number of infinities!

I’m not planning to show where they all come from in this post – I’ll just show that there is more than one.

If you go out with six friends this week, how will you know there are six of them? Well, OK, that seems like a simple question – because you can count, right?. Yes, but understanding how we can count is the starting point of understanding where all the extra infinities come in. You know you have six friends with you because you have given each a number, starting with 1..  and you got up to six! OK so may not have done that explicitly, but that is what you did.

And that is what we are going to use in a moment to demonstrate infinities.

Two quantities are the same if you can match up one item from one ‘list’ with one ‘item’ of the other… and have none left over. So the numbers 1 to 6 can be matched with your 6 friends with no numbers left over.

Now, this is where we come to some surprising ‘facts’…..  Ask,  are there more whole numbers than ‘even’ whole numbers.  You think, yes? Well look at this…..

Even numbers can be paired up with whole numbers with no numbers from each group left out.  This is one of the surprising things we learn about infinity. The number of even numbers is the number all numbers. 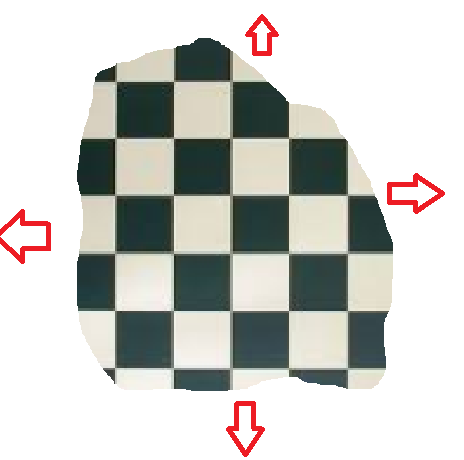 Now imagine you are on a ‘chessboard’ floor that stretches for infinity in all directions.

How many squares are there. Infinity – or more than infinity. This, after all ‘infinity squared

Let’s try counting the squares in the same way that we counted your friends.  Start with one square – it could be the one you are standing on. Thats 1.  Now count the 8 squares around you – 2,3,4… 8

Then the squares around that. 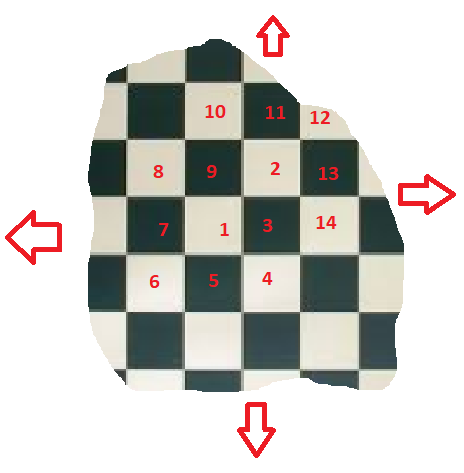 You can keep going like that for ever  – but that’s OK, we can keep counting for ever.

Now, at this point, if I didn’t know what was coming next, I might be starting to doubt my earlier remark – that there is more than one sort of infinity.

Lets consider now, decimal numbers, by which I mean numbers of the form

I have 20 digits after the pint there. Lets say we mean numbers that DO end, but we will not specify how many digits they have before they do.

So lets start with the number 1.5

There are actually an infinite number of next steps, and thats before we get off our first ‘square’.

And THAT is where the next order of Infinity comes in. Its not possible to ‘count’ the decimals  with the numbers 1, 2, 3 …….  even they go on for ‘infinity’.

There are more than infinity decimals!