This  posts uses Similar triangles to solve a question that was posted in a Facebook group for tutors.   I thought it was fun so I’m sharing it here.

My answer uses the idea of Similar Triangles. If you are not sure what they are, click here.

My first thought on seeing the question was that similar triangles were involved but I didn’t realise they were studied before 11.

Anyway, here is the question. 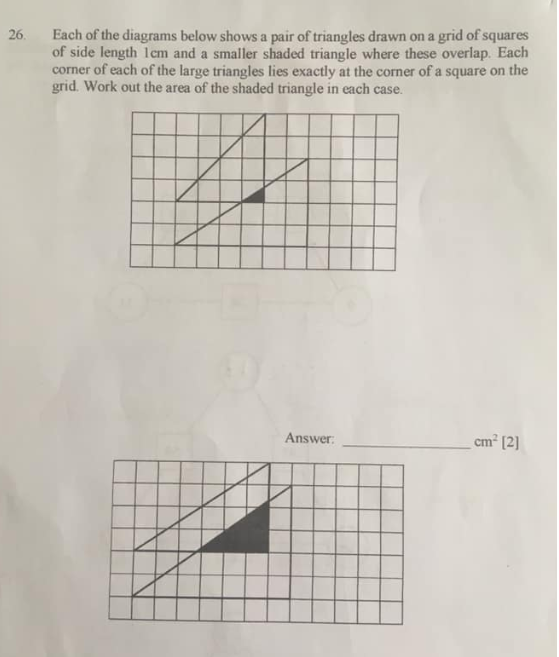 There are two parts but the method is the same in both. You can just look at one of the lower triangle and the overlap. The whole of the other triangle can be disregarded

The key is seeing that the shaded area is ‘similar’ to the lower triangle (or the other one).  We can show they are similar because all the lines are parallel, so the angles are the same – corresponding angles

Both Triangles have a vertical line and a horizontal line, so those two pairs are parallel, and the two hypotenuses are ‘parallel’ as they are part of the same line.

As they are similar, the sides must be in the same ratio.  The ratio between them can be seen most clearly by comparing the lengths of the bases….  6 for the bottom triangle, 1 for the overlap

The method for the second triangle is the same.  here the ratio is 7:3 and the height of the lower triangle is 5cm.