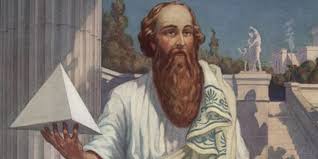 Pythagoras could be the first famous mathematician we learn about at school, when we learn the famous formula relating to triangles
h2 = a2 + b2

But how much do we know about the man behind the theorem?

Pythagoras lived 6th century BC.  He was a Greek but settled with his followers on an island off the coast of what is now Italy – But then the ancient Greeks travelled all over the Mediterranean  They lived as a cult in an uneasy relationship with the locals, and were probably driven out before their leader died in 495BC.

The Pythagoreans believed, among other things

But its not clear that they did invent the theorem, which was know to the Chinese and Babylonians Centuries earlier. It is thought that they produced one of the first recognised proofs