Ah..  I’ve been busy making videos for My Facebook Group and neglecting the blog!!

It looks like it was two months ago since I last write here!  Whoops……

I’m coming straight back at you with a problem in Logic!!   (And next week I’ll start something of a ‘series’   Don’t know what yet!

So here is a weekly Conundrum …  and I’ll declare my sources here. This is a ‘puzzle’ set by philosopher Bertrand Russell…  But its relates to ‘Set Theory’  which is part of some Maths courses.  Oh an apology, this puzzle assumes an all male world! 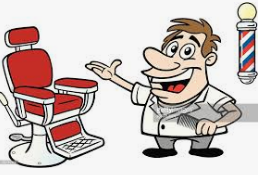 The question is…   Does the barber shave himself?