Well, its hot here in the UK, and that may not make people think immediately of maths! But its a subject useful for every occasion. Today we look at the Maths of Temperature

So today I am writing about ‘temperature’ and 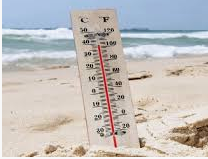 how it helps us understand Maths.

Temperature is the sample I often use when explaining negative numbers to students.  It is one example were minus numbers are used in everyday life – but perhaps not in this weather!

After negative numbers, another interesting and useful part of the Maths of Temperature is using conversion formulas and rearranging formulas.

There are two temperature scales in common use; Celsius and Fahrenheit, both named after the scientist who invented them.

(We use abbreviations  ͦ C  and  ͦ F for these.  Some people think the first of these is called Centigrade. This is understandable because we started using  ͦ C in the UK about the same time we started using metric measurements like centimetres. But it’s more accurate to use the inventor’s name. The initial is just co-incidence)

We define both scales by the freezing and boiling points of water – 0 and 100 in Celsius; 32 and 212 in Fahrenheit. Quite why we use these numbers for Fahrenheit seems very strange, but its likely that wasn’t how Mr Fahrenheit came up with his scale.

If we know the temperature in Fahrenheit but we would like to know it in Celsius, then we need to rearrange the formula. This is especially useful if we need to do this calculation several times.

This is a subject on which I helped a student once after his Science tutor said he wasn’t getting it. After working on it with me, the Science teacher noted the improvement.

In fact a study of rearranging a formula is not only useful in Maths. It is also useful in the study of the Sciences, especially Physics

This has been a short post, tidying up the last one.