Today we look at another exam question, where we are asked to work out those angles. Or at least one named angle 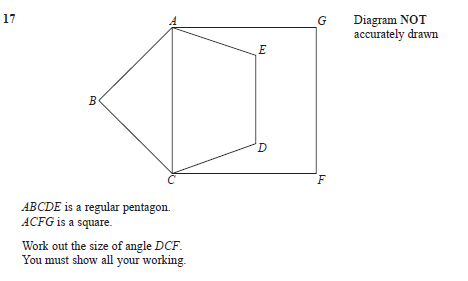 I was working on this question with a student a couple of weeks ago, and he worked out the answer quickly, but wasn’t quite able to describe why….  so this one is for you, Joe.

For a question like this, we do need to show we understand the reasons why each stage of the answer works.  Relationships between angles often have names (Complimentary angles, Associate Angles) but we don’t need to know these for this question.

We do need to know.

So these are the steps that Joe took, in his head.  (He is an able student.) and the reasons he, and we, need to give at each stage for full credit in an exam.

Now you have a few clues on how to work out those angles missing in any exam question.