There is a story about mathematicians that I think I first read when I studying for A-level. 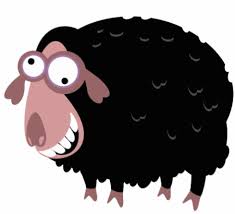 An astronomer, a physicist and a mathematician are on a train in Scotland.  The astronomer looks out of the window, sees a black sheep standing in a field. “All the sheep in Scotland are black!”, comments

“Oh no” says the physicist. “Only some Scottish sheep are black.”

This is the cue for the mathematician to get involved. “No,” he tells his friends. “In Scotland, there is at least one sheep, at least one side of which appears to be black, some of the time.”

I remembered this story yesterday when posting the problem about the dogs, which I reckon wasn’t written by the same mathematician. I’ll explain why in my next post, where I will also give the answer!