Continuing yesterday’s theme of higher dimensions, in this post I look at a couple more 4 Dimension shapes and how they can be represented on a screen.

Thinking about how to show 4 dimensions its helpful to think of ways to show 3 dimensions on a 2D screen. One such way is to take ‘cross sections’.  For example, one way to show a cylinder is a series of circles.  Stack these together and you get a cylinder.

Another way of thinking of this is to consider time as the forth dimension*.  Imagine seeing a sphere appearing as a dot, then growing to ‘full size’, then disappearing again at the same rate.  The diagram here would show stages of the process.

I’ve seen other representations of a ‘hypersphere’ but this is the one clearest to me.

How would a ‘Hypercube’ look like, using the same ‘cartoon technique?

(*Some people think this to be the case, through the 4-Dimension space-time physicists work with isn’t that simple, but it will do for this thought experiment).

Before we move off 4-Dimension shapes, I’d like share one of my favourite shapes. This can only exist if we have 4-Dimensions (The closest 3 dimension idea is a mobius strip) 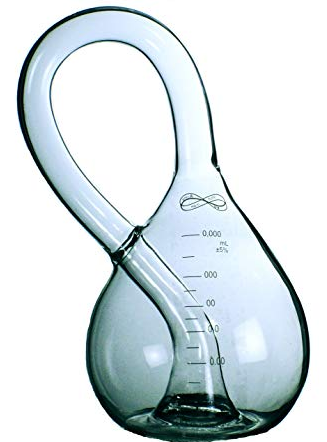 In the picture, it looks like the bottle goes ‘through itself’. In the ‘4 dimensions’ this would not be the case.  Rather like if we want to get past a wall we step over it, using the third  dimension that a creature who knew only two dimensions could not